There are a few days to go to the weekend but you can still squeeze in some mid-week culture with a lunchtime trip to the theatre!

We went to see the show recently and thoroughly enjoyed the performance. We were treated to jellybeans, lucozade and an action-packed journey through the life and trials Dan Coyle Jr., a failed amateur boxer from a long line of successful fighters. Dan must come to terms with the fraught relationship he has with his father while learning to be a father to his own baby son as he prepares to re-enter the ring.

Aonghus Óg won Best Actor for his performance in Dublin’s ABSOLUT Fringe 2010 and you can certainly see why, as he delivers a moving and at times hilarious performance while skipping, boxing and jogging his way through the show.

We worked with Rise Productions and the Lisa Richards Agency on the promotional material for the play. We split a photo of Dan Jr. across both sides of the flyer to show the different sides of his character – on one side a boxer, on the other a new father and a troubled son. 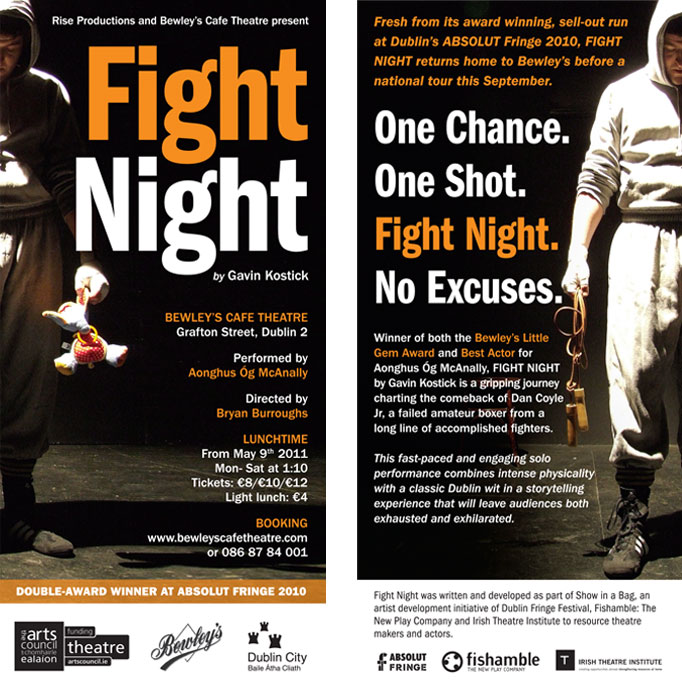 Fight Night runs Monday – Saturday until the 11th of June at 1.10pm, we would thoroughly recommend treating yourself to a more interesting lunch break by watching the show! For further information click here.

PS. There are still a few days left to enter our clinky competition to win one of our commemorative postcards – just comment on this post to be in with a chance to win!